Highlights of the Ottoman Crown Jewels

The Ottoman Empire is famed for it’s beautiful jewelled creations but this is a slight trick question as there is no set collection of crown jewels that was passed down between the rulers of the empire known as a Sultan. Instead, there is a collection of mysterious jewels and ancient treasures that are associated with the Ottoman Empire including mysterious diamonds, gilded swords, elaborate battle and ceremonial clothing, and emerald encrusted daggers.  These treasures are considered to not only have an economic value, but they contain, of course, a historical value, and, perhaps surprisingly, spiritual value.

Why a spiritual value?  Well, the Sultan was also considered to have Islamic religious authority.  He was given the Islamic title of “Caliph”. The Ottoman Empire claimed this authority beginning in the year 1517.  In layman terms, this meant that the Sultan in power was the religious successor to the Prophet Mohammed. In terms of the contribution to the Ottoman crown treasures, there are many stunning objects that were presented to the various Sultans that are of a religious significance.

While there are objects that originated from all corners of the Earth, there are also many gifts that were given to the Sultans from local Ottoman Empire artisans, particularly jewelers.  The other important thing to remember about the Ottoman Empire was the fact that it was comprised of a rich, multi-ethnic empire. Greeks, Armenians, Jews, Assyrians, and more all lived side by side with their Muslim neighbors.  The Sultans relied on these minority groups for their banking needs, as chief architects, and, most importantly for this subject, their artistic prowess. In a time where even battle armor was bejeweled, minority artists of the Ottoman Empire handcrafted extraordinary creations. Let’s take a more indepth look at some of the standout pieces in the collection of the former Ottoman Empire Sultans and their families housed at the Topkapi Palace’s collection.

The Sword of Osman 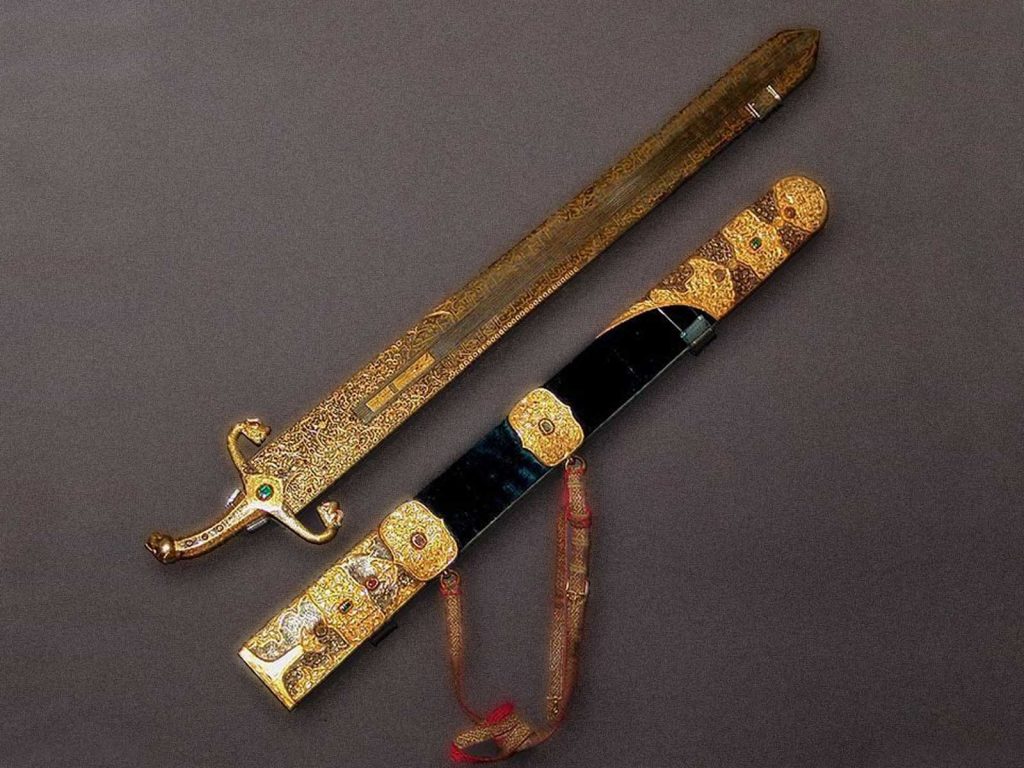 First of all, we need to clarify something.  When we hear the phrase “crown jewels” we’re instantly picturing a crown, but unlike other European dynasties, like the House of Windsor, the Ottomans didn’t use a crown to coronate their rulers. Don’t get too disappointed!  They merely had a different tradition. Instead, there was one special object past down from Sultan to Sultan that was used in the Ottoman enthroning ceremony. Can you guess? That’s right. A sword. The Sword of Osman is a golden sword named after the Founder of the Ottoman Empire, Osman I. He considered his father-in-law Sheikh Edebali to be his mentor and Sheikh Edebali gifted Osman the infamous sword. There is even a Sherlock Holmes mystery named after this particular sword! Importantly, as far as jewelry is concerned is that the work on the sword highlights a technique called in Turkish “Murassa”.  Murassa is the art of basically bejeweling an object.  The sword has elaborate metal work and jewels on it. Subsequent swords and other weapons in the Ottoman Empire got even more elaborate with time as we will see with our next highlight from the palace. 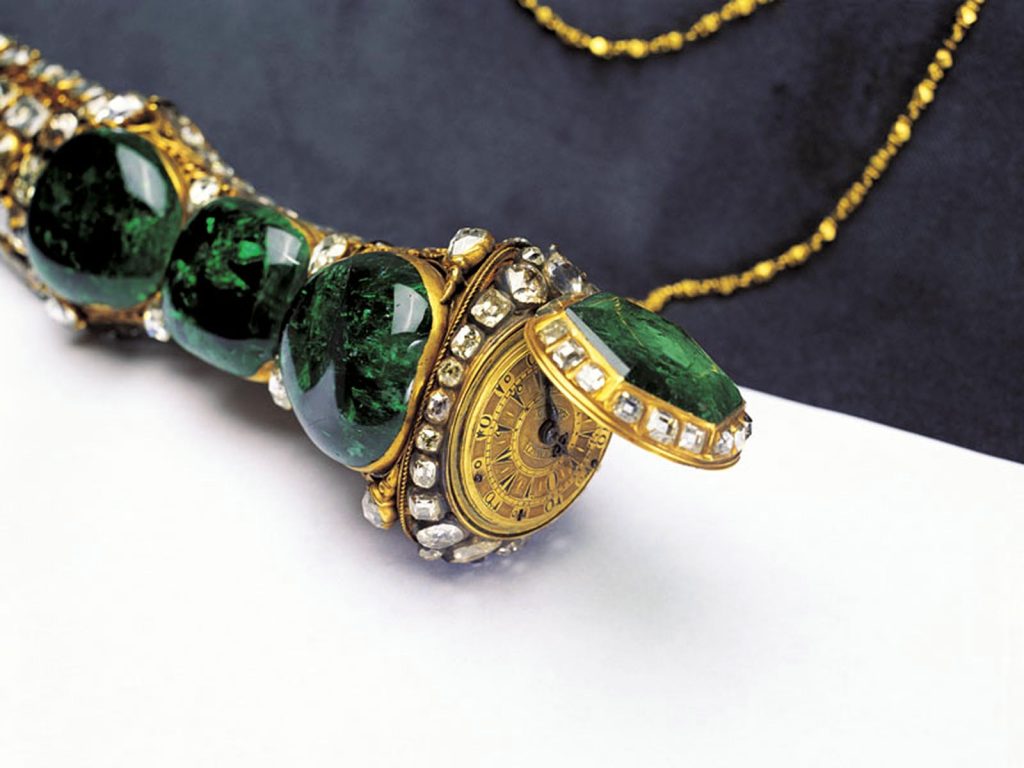 Originally, this dagger was one of several valuable gifts sent by Sultan Mahmud I to the Iranian Iranian conqueror Nadir Shah. This dagger never completed it’s journey to Iran as just as the embassy of the Sultan Mahmud crossed into Iran, Nadir Shah was assassinated. The dagger and other gifts were returned back to the Topkapi Palace where it is one of the most celebrated exhibitions on show today.

One side of the dagger is set with three Colombian emeralds of outstanding colour, size and clarity. It’s for these three emeralds where the dagger gets its name. Two of the three emeralds are pear cut stones and the central one is a rectangular cushion cut emerald. These emeralds comprise the handle of the dagger whilst the sheath is set with 31 white diamonds set in a symmetrical pattern which, brings us to the subject of diamonds!  What about them???

One special piece of jewellery that is still on display today at the Topkapi Palace is the Spoonmaker’s Diamond. Despite the clarity of the Spoonmaker’s diamond, it is shrouded in mystery and secret as today its origins are still unknown no one knows how it came to Istanbul’s old city and who was the person who took it there. This magnificent diamond is 86 carats and cut into a pear shape set into solid silver and surrounded by a halo of old cut diamonds. The Spoonmaker’s Diamond is a must-see for anybody visiting Istanbul and is probably the one piece from the palace that will live in your memories.

As far as a piece of jewelry goes, the spoonmaker’s diamond is huge at 86 carats, but the biggest bejeweled pieces at the palace are the thrones of the Sultans, in particular, the notable throne of Ahmed I. Mimar Sinan, an Imperial Architect of Armenian origin, is considered the preeminent Ottoman Empire architect.  He designed bridges, mosques, and more. His apprentice, Mehmed Ağa, is the architect of the Blue Mosque not far from the gates of Topkapi Palace.  Mehmed Ağa is the designer of Ahmed I’s throne.  It is considered one of the best examples of 17th century Ottoman Art.  It highlights the techniques of “Sedefkâr”, which is the technique of inlaying mother of pearl and a lacquering technique called “Edirnekari”.  It also contains gemstones such as diamonds, emeralds, jades, and turquoises (among others).  All of these techniques and gemstones have been fashioned together in an intricate and magnificent floral and vegetation adorned domed throne.  It is truly a piece you must see in person to fully appreciate.

When you visit Topkapi palace, you will probably be struck with the amount of men’s brooches, elaborate medals, and pieces called a “sorguç” in Turkish.  Basically, these are pendants for a turban. A Sultan of the Ottoman Empire would even be buried with these pieces. They would wear up to three at a time on their turbans and are spectacular.  But wait! Where are the women’s jewelry? The Sultans each had a harem of women, meaning a special area separate from the other parts of Topkapi Palace. In the harem lived the wives and concubines of the Sultan, their servants, and the female members of the Sultan’s family.  Didn’t they receive gifts of jewelry? The short answer? Obviously. So where are the majority of these pieces of Ottoman women’s jewelry you ask? 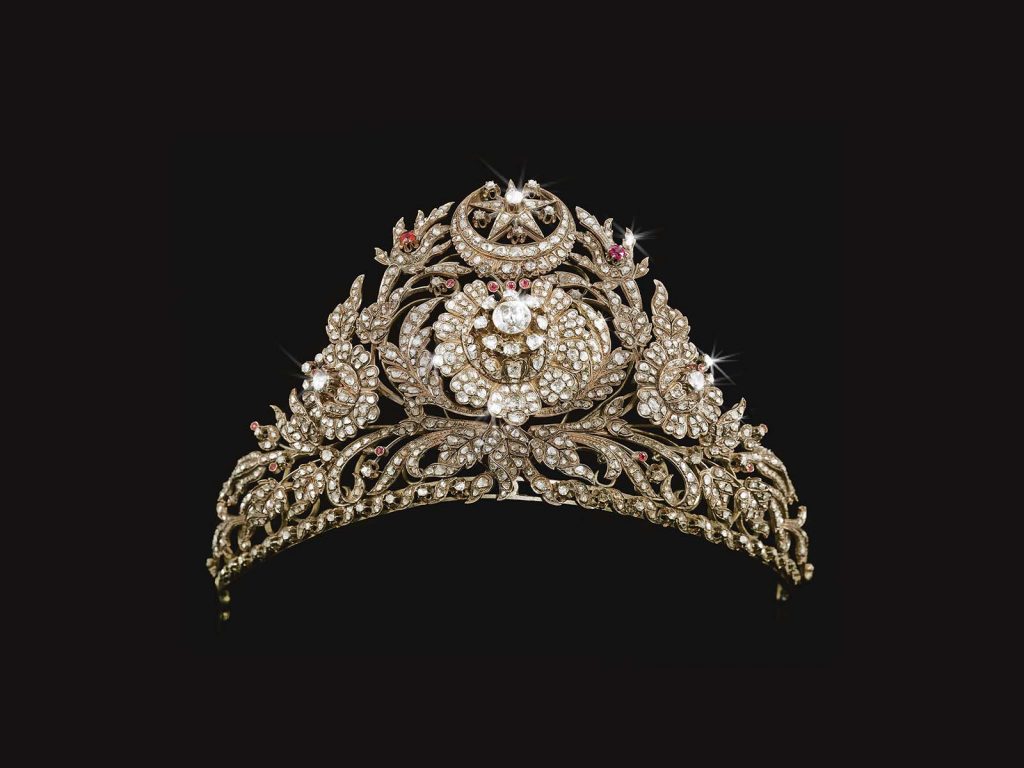 Well, when the Sultan would marry off a daughter of his, she would be allowed to take many valuable pieces with her, including jewelry and murassa decorated objects.  This means that 1. We can find gifts that, at one time, were in the Sultans’ treasury in various museums’ collections around the world 2.  Unlike the women, the men receivers of the Sultans’ gifts like state officials had to give back their gifts at their time of death, which is why the palace’s collection contains so many of them 3.  The contents of the Sultans’ treasury during the time of the Ottoman Empire were constantly in a state of being restocked and restored,making it necessary for the Sultan to support a vast network of artisans constantly creating new and innovative designs making it lucky for us today!

While the history of jewelry in Anatolia goes back over 5,000 years, the collection of Topkapi Palace is a reminder of the legacy of the Ottoman Empire in the art of jewelry.  We have the Ottoman Imperial Family and their patronage of the multicultural artisans of their empire to thank for elevating Turkish Jewelry today.

With a story as intriguing as the next, it’s hard to pick a favourite out of these four masterpieces and will we ever know the origins of the Spoonmaker’s Diamond or what happened to Süleyman the Magnificent’s Venetian helmet?